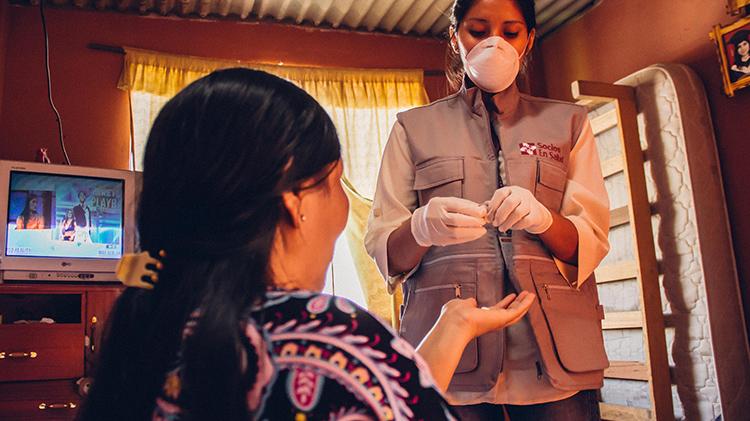 For the first time in 50 years, two new drugs are available to patients battling the most trenchant forms of tuberculosis. TB experts around the world, including those at Partners In Health, hope that Bedaquiline and Delamanid will deliver patients a quicker, less toxic cure than older drugs on the market.

They will soon see whether their hope is justified.

Through an effort called endTB, PIH and nongovernmental organizations Médecins sans Frontières and Interactive Research & Development are offering new treatment regimens that include Bedaquiline and Delamanid to more than 3,000 people. Patients will be selected from 15 of the most TB-plagued countries—including Peru, Lesotho, and Kazakhstan—over a four-year period. UNITAID is funding the global effort, which launched in April 2015.

In endTB’s first phase, patients diagnosed with multidrug-resistant tuberculosis (MDR-TB) take Bedaquiline and Delamanid as part of the typical two-year treatment plan sanctioned by the World Health Organization. In its nascent second phase, a separate group of patients will enter a clinical trial that tests the speed and efficacy of combining Bedaquiline and Delamanid with other drugs in six innovative treatment regimens. TB experts hope one of the regimens will yield a cure before six months.

So far, Georgia is the only country to have launched its clinical trial. Lesotho and Peru are close behind, having recently trained endTB staff and clinicians, according to Segundo R. Leon, co-investigator of the endTB clinical trial in Peru and director of research at Socios En Salud, as PIH is known locally. Below, Leon describes how MDR-TB is currently treated, how that may change in the future, and why he hopes the clinical trial will be a success.

Treatment for drug-resistant TB is notoriously long. Can you explain what most patients typically go through?

Before these new drugs, patients used to go through regular treatment, which includes injections. Those daily injections take almost six to eight months, followed by pills for up to 16 months. It requires that the patient go to the hospital or health center or be hospitalized for long periods of time. That means it’s less feasible to treat a lot of patients.

The idea with this project is to move forward to new oral treatment, which can be delivered more easily to patients.

Why has it taken 50 years for new TB drugs to be developed?

In general, antibiotics development has been a very slow process. In the 20th and beginning of the 21st centuries, we had such a big amount of money in developing new medical diagnostics and treatments, but antibiotics were probably the least funded. These new drugs are a new hope.

How many people have started taking Delamanid and Bedaquiline so far in Peru?

The Ministry of Health currently has around 50 patients, but their goal is to reach 400. We are going to start recruitment soon for the clinical trial. Our intention is to treat at least 140 patients.

How are patients doing on the new drugs?

Most of the 50 patients have completed their six months of treatment with Bedaquiline and are now receiving the rest of their regular treatment for up to two years, based on their medical evaluation. Their adherence to the new drugs was excellent.

Have there been any adverse side effects?

We’re aware that the new drugs, especially Bedaquiline, caused some adverse events in patients with heart disease. One of the things we monitor very often is the patient’s cardiac rhythm. Also we see some side effects in combination with other drugs, like with drugs for HIV treatment. We are preparing our physicians and nurses to be aware of any adverse effects during the clinical trial. So far, we haven’t had any complications in the first group of 50 patients.

Where are patients receiving care?

We have incorporated endTB inside every hospital we work with, including Hospital Nacional Sergio E. Bernales and Hospital Nacional Hipólito Unanue. In both, we have doctors recruited from the hospital, but we also have additional doctors who only work for the project we run. They will see the patients every day. They check their blood and look for any sign of adverse events.

Our nurses don’t work for the hospital. But since they are in contact with the hospital all the time, they are prepared for managing everything, even if the patient is at home. The patient can call the nurse and say, “OK, I’m not feeling good. This feeling is kind of rare. Can you come, or can I go to the hospital?”

How close are we to launching the clinical trial in Peru?

We expect to have everything ready in less than two months.

How are we finding these patients?

We go to every health center and look for the patients who have been diagnosed with TB and also have resistance to rifampicin or other TB drugs. Then we know they have MDR-TB and can recruit them to participate in the study.

Where do most of the patients come from?

This is only Lima. And even within Lima, it’s only certain parts of Lima—especially in the northern and eastern part, which are zones with a higher burden of TB.

Will we be able to find enough patients?

We’re not expecting problems with recruitment. We actually think there are a lot of patients out there with MDR-TB and are not diagnosed. We can help the health centers identify those patients faster than they do, because we collaborate by providing some of the drug sensitivity tests. One of our strengths is our experience recruiting and retaining patients in the community.

How will treatment within the clinical trial be conducted?

There will be six different combinations of drugs. The idea is to give the patients those different combinations for 70 weeks. Some of them will include Delamanid. Some of them will include Bedaquiline. And one includes both. The goal is to see which of those groups becomes TB-culture negative faster than the other. We don’t know yet in which week they will become negative. We expect it will happen after the sixth month.

What are you most excited about regarding this clinical trial?

People with TB, especially MDR-TB, used to fail the first line of treatment because they weren’t able to adhere to it. Some were infected with HIV. Others had to deal with structural factors. They are poor. They don’t have a job. They have a problem with transportation. Or they have family they are worried about and have to support, so treatment is not important to them. I’m very excited that they can take the pills to their homes and complete treatment easily instead of receiving shots.

The other part is that, after many years, we are introducing new drugs for an old disease. And we are trying to tackle a disease that affects the poorest people, those with the least access to health care. Both parts of endTB, the programmatic side and the clinical trial, will include patients affected by MDR-TB, so they will receive treatment for free.

Also, this trial will update nurses’ and doctors’ knowledge about how to treat TB. The government, through the Ministry of Health, is changing the guidelines for TB treatment to include these new drugs. Once those drugs are in the guidelines, it means everyone in the country can use them.